In celebration of hapi plugin boundaries, here we offer a concrete approach to taming inter-plugin dependencies.

While it's ideal to minimize dependencies, let's face it—sometimes your plugin is going to depend on another plugin in order to work. This article takes an in-depth look at managing dependencies across plugins. We will characterize different types of dependencies and determine the best way to handle each type. Luckily there are only three!

If you've dug into handling plugin dependencies at all, hapi's server.dependency(deps, [after]) method probably stood out to you. What does this method do? According to the docs,

Used within a plugin to declare a required dependency on other plugins where... [deps is] a single string or array of plugin name strings which must be registered in order for this plugin to operate. Plugins listed must be registered before the server is initialized or started.

This method simply checks that the plugins listed are available when the server is being initialized or started. What it does not do is ensure plugin registration order. Let's demonstrate!

Suppose that your plugin needs to use server.views() as provided by the vision module to integrate a templating engine into your application. One might assume that it amounts to declaring vision as a plugin dependency using server.dependency().

Note the code below is an anti-pattern, i.e. not something you want to repeat!

Will the code above be Ready to go!? It turns out that it will not be! The error you'll receive is the following,

This happens because vision has not been registered by the time my-app-plugin is registered, so the server.views() server decoration provided by vision is not available yet. How can we tell that vision isn't registered in time? Check out the call to server.register() again.

The problem remains that we want to avoid managing plugin registration order as much as possible. Whenever we can, we'd like our application plugin to be able to do something to guarantee that its dependencies will be there when it needs them. Simply having faith in registration order is not a good enough general-purpose solution for our application plugins. Luckily hapi still has us covered—read on!

What about the after callback in server.dependency(deps, after)?

Now, this is one magical callback, and it really speaks to the power underlying hapi's plugin system. First, the after callback is called at the time of server initialization/start; it's actually equivalent to adding an onPreStart server extension. But beyond that, it also respects the dependencies when it comes to ordering the invocation of all after callbacks and onPreStart server extensions. So if plugin A depends on plugin B, and plugin B depends on plugin C, then hapi will ensure that the after callbacks are called in order: C's then B's then A's, independent of the order in which those three plugins were registered. This makes server.dependency() an even more powerful tool in handling run-time dependencies.

When might the after callback be used? Imagine a plugin, my-db-plugin, that provides a database connection server.app.db at run-time, during server initialization. In your application plugin you want to check for the existence of a particular table during server initialization/start, because it's required for your plugin to work. You want your plugin to perform this task at run-time, but only once the database connection provided by my-db-plugin is already available. The after callback to the rescue!

Curious how hapi resolves the ordering of dependencies? See the topo module!

How should this have been handled?

Wouldn't it be ideal if our plugin could just ensure on its own that its dependencies are available at registration time? In many cases our plugin actually can do just that. In fact, just about any plugin that does not receive options can be ensured directly by its dependents. hapi provides an option—declarable by a plugin or when registering a plugin—that ensures the given plugin will only be registered one time even when it appears in multiple calls to server.register(). This basically allows our application plugin to server.register(Vision) without worrying about duplicate registrations of vision, which hapi would otherwise complain to us about. The option is called once. In other words, the first time a plugin is registered with once it is processed normally by hapi, but subsequent registrations are simply ignored; hapi's default behavior is to complain when a plugin is registered more than one time. In the case of vision, it has the once flag specified as a plugin property* (docs), so we don't need to take any special care. Below is a corrected version of the anti-pattern above.

* The current version of vision actually uses a slightly more advanced plugin property called multiple. The multiple property just offers a greater level of control as to which plugin code in vision re-runs each time the plugin is registered, but it is in the same spirit as once, and the code example below remains a good illustration of how to use vision. The inert plugin still offers a good example of once.

The technique here is to let my-app-plugin simply register its own dependency. And crucially, if there were another application plugin on the server that depends on vision, it would be able to do the exact same thing!

What if vision didn't specify once?

If the plugin you want to ensure at registration time doesn't specify the once plugin property like vision does, you're not out of luck. You can take control and set it yourself as an option at registration time using server.register()'s options. Here's an example of an app plugin my-app-plugin safely depending on a hypothetical plugin named slimey,

Why does this only work with plugins that don't receive options?

If a dependency takes options then the once technique is off-limits. The reason for this is that its configuration would otherwise be unpredictable. Every plugin that depends on it would be racing to register it using server.register(), and in turn racing to configure it first. Nobody would know if the options they passed to the plugin were actually used!

One case remains: what do we do when we have a registration-time dependency on a plugin that does take options? This is by far the yuckiest case of all! Assuming that there's no way to re-envision the implementation of the dependencies, the only option is really to manage plugin registration order. It's not ideal, but it's also not very common. It's a responsibility of plugins to play nice with their dependents—look for an article on this topic in the future, and in the interim feel free to ask questions on hapipal/discuss.

If you have a lot of dependencies like this to handle, hodgepodge is a pal module that can help with these plugin dependency woes by respecting your plugins' dependencies properties while a group of sibling plugins are being registered. However, it does not always work organically with plugin- and server- composers such as haute-couture and glue. There's room for improvement here in userland—let us know if you have any good ideas!

If you hit this case, ensure that it's really necessary to have a registration-time dependency that takes options—there may be a better way, like turning it into a run-time dependency. Hodgepodge exists for completeness or to tame existing code that already has this problem, and needn't be the first solution to reach for.

The flowchart you've been waiting for

This is the decision tree you should be keeping in your head while handling plugin dependencies. 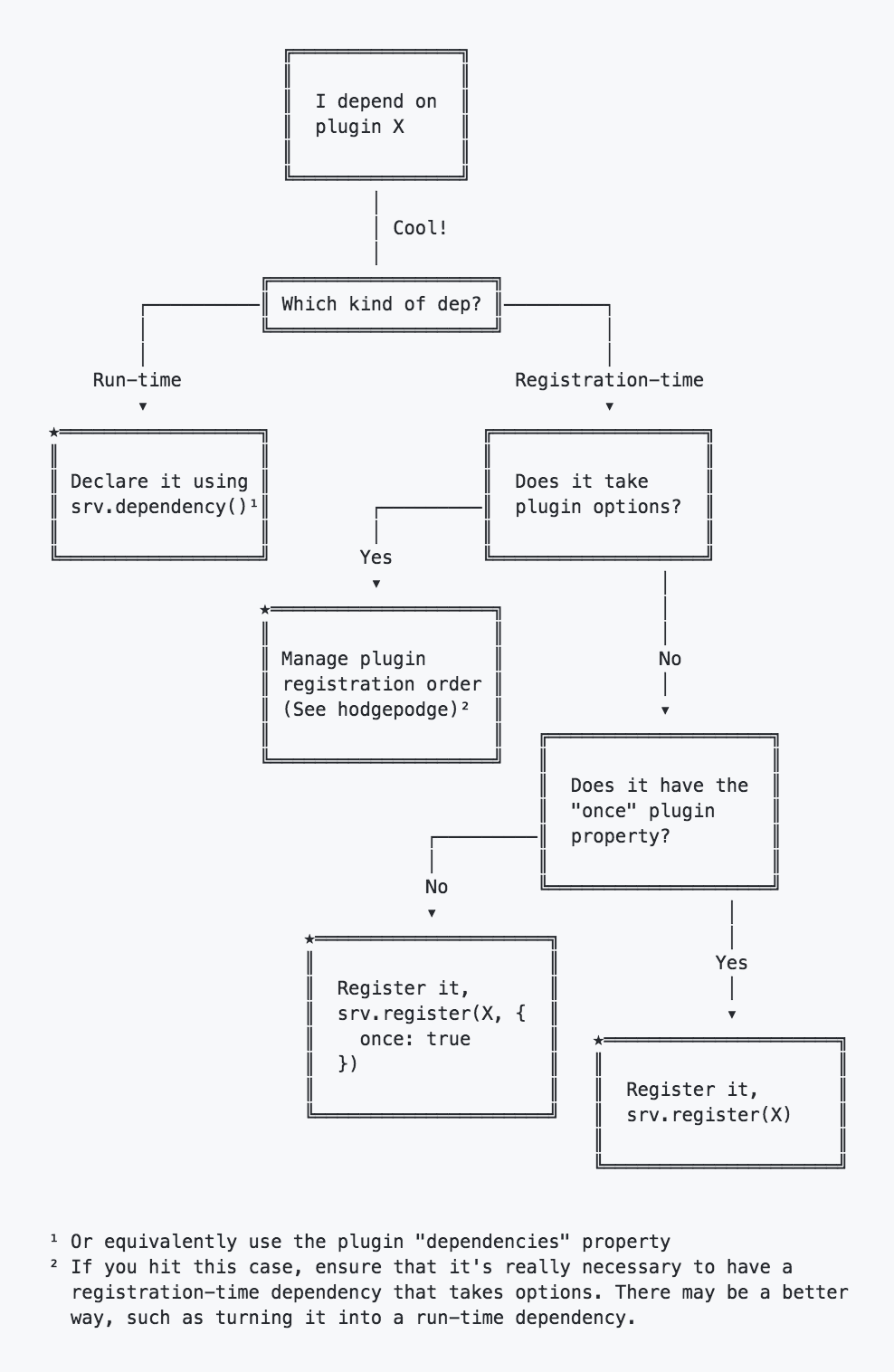